To share your memory on the wall of William \'Bill\' Marshall, sign in using one of the following options:

Print
William “Bill” Marshall, 64, of Greeley, passed away peacefully with his wife and daughters by his side on the evening of Thursday, February 18, 2021 in Greeley, Colorado.

Bill was born in Akron, Colorado to Bill & Ada (Morris) Marsh... Read More
William “Bill” Marshall, 64, of Greeley, passed away peacefully with his wife and daughters by his side on the evening of Thursday, February 18, 2021 in Greeley, Colorado.

Bill was born in Akron, Colorado to Bill & Ada (Morris) Marshall on December 12, 1956. The family lived in a small farmhouse just outside of Cope, Colorado where Billy ended up being the second oldest of five children. This was his home until he was about six years old, when his family moved to Vona, Colorado. Billy was always very helpful to his parents on the farm. One of his favorite things was to tend to the cattle. A few years later, Billy, along with his family, moved to Cope, Colorado. During that time Billy enjoyed delivering newspapers on his bicycle, even in undesirable weather.

He was very active in extracurricular activities while attending Arickaree School. Billy was proud to be the District Vice President of Future Farmers of America. During this time, he enjoyed raising and showing pigs. Billy was also quite the athlete, competing at the state level in numerous sports, including wrestling, football, and track. Because of his amazing athletic ability, he lettered all four years of high school. In fact, when his daughters were younger, they enjoyed going to the school and seeing their dad’s name and records still being held and displayed on the walls of the school.

After he finished college, he moved to Greeley, Colorado where he met his first wife, Jamie Sheets. They married in early 1980 in Cope, Colorado where they moved and lived for the first four years of their marriage. During that time, Bill was extremely excited to welcome his first daughter, Heather, who was born on November 29th, 1981. He was surprised and thrilled to welcome his second daughter, Sherry, shortly after on October 11th, 1982.

The first of Bill’s heart surgeries came in 1984 at the young age of 27, due to complications from an infection he incurred. This was a hard and trying time for all his family, but they endured and got through it. Bill was a strong man and after many months of being in the hospital he recovered and was able to return home with his family. His young girls loved putting their heads on his chest, listening intently to the new ticking heart valve that he acquired. So much so, that both young daughters had to bring their daddy to their school for show and tell, allowing all their classmates to listen to their dad’s new and improved heart.

Bill started his own trucking company, B&J Trucking, where he enjoyed traveling the country. His most cherished memories of this time were when his daughters were able to join in the fun. The girls loved traveling to all corners of the United States with their daddy. Sherry was always more than happy to stay awake and talk his ear off during the night, while Heather enjoyed talking on the CB radio to all their fellow truckers. Bill would indulge his daughters by playing and singing silly songs by Madonna, On the Road Again, and Grandma Got Ran Over by a Reindeer, among other favorites.

Bill welcomed his third daughter, Ashley, on November 16th, 1988. He was now a proud dad of 3 beautiful girls and lived the next few years of his life in Platteville, Colorado.

He faced various health issues throughout the 1990’s, including another open-heart surgery. Bill was in the hospital for several months because of complications. There were many times where his family and the medical staff were unsure if he would make it through this time. But once again, Bill showed his strength and fortitude and recovered better than anyone had hoped.

After a few trying years, Bill and Jamie later divorced. He then moved to Platner, Colorado to be closer to his parents and siblings, as his daughters were growing and starting lives of their own.

In 2001, his daughter, Heather, introduced Bill to the love of his life, Paula Haug. After getting the blessing of his daughters, Bill proposed to Paula on Easter of 2002. Paula said no the first time, and Bill was baffled. But that didn’t deter Bill’s undying love for Paula. Approximately 3 months later, Paula decided that she couldn’t live without him. She called Bill asking, “Does your offer still stand?” Bill, of course, said, “YES!” The happy couple were married on May 30th, 2003 in Greeley.

Through this new marriage with Paula, Bill gained a bonus daughter, Katy. This now made him a proud father of four rambunctious daughters. As Katy put it, “You could really tell he loved my mom, because I was quite the handful.”
After Bill and Paula married, he started managing at Anderson’s Sale and Salvage Inc. He made many friends during his 18 years at Anderson’s. Many of which were from work connections, who recall Bill as being caring and one of the kindest people they’ve ever met. He enjoyed his career with his supportive work family until the time of his passing. His daughter received a special message from one of these people after his passing, remembering a time where Bill helped her through the loss of a child. She said, “talking to your dad was exactly what I needed to get through that hard morning.” She said, “You girls hit the jackpot on the best dad.” And his daughters agree.

In December 2005, Bill’s first grandchild, Keegan, was born to daughter Sherry in Hawaii, where she was stationed in the US Navy. Bill was now a proud grandad and was ecstatic to travel to meet him as soon as he could. He went on to have many more grandchildren, whom he loved with all his heart. His favorite pastime was spending time with his family and being silly and fun loving with all his grandchildren.

Once again, Bill proved his strength and perseverance while battling through kidney cancer. The doctors caught it early and were able to remove one kidney in hopes that it would get rid of the cancer. Bill and his family were ecstatic to find out that he was cancer-free. However, shortly after the good news, Bill’s lungs collapsed due to an infection. There again, he spent several weeks in the hospital, but approached this ailment with the same amazing determination and resilience as all his previous conditions.

Bill was able to enjoy another memorable thirteen years with his loving family. Unfortunately, close to a year after Covid-19 rampaged our world, Bill contracted the virus. Bill’s family was devastated because they were not able to hold his hand and comfort him through this, like all his past hospital stays. Sadly, this was the one thing that Bill was not able to recover from. Thankfully his wife and daughters were able to be by his side when he took his last breath.

Bill enjoyed several hobbies throughout his years. He was a master craftsman in woodworking, making everything from elaborate wooden chairs to a cedar chest for his daughter’s 16th birthday present. He built several sheds, clocks, rocking horses, and countless other beautiful items throughout his life. He also loved camping with his family. His favorite spot was a small campground at the Lost Lake where he taught his daughters to fish, hike and cook over a campfire. He also loved working on cars just like his dad. Bill was an avid reader of all genres and was always sitting with a book in hand in the evenings with Paula.

Bill has joined his father and grandparents in heaven.

Bill would leave his family and friends with these special, loving words:

“I love you, don’t ever forget that.”

To send flowers to the family or plant a tree in memory of William 'Bill' Paul Marshall, please visit our Heartfelt Sympathies Store.

Receive notifications about information and event scheduling for William 'Bill'

We encourage you to share your most beloved memories of William 'Bill' here, so that the family and other loved ones can always see it. You can upload cherished photographs, or share your favorite stories, and can even comment on those shared by others.

Flowers were purchased for the family of William 'Bill' Marshall. Send Flowers

Posted Feb 26, 2021 at 09:39am
I will always remember the time I would see Bill at andersens we would talk He will always be in my thoughts Bill was took his job seriously some how managed to give a smile RIP BILL Mike Meis You are without all the pain know
Comment Share
Share via:
HR

Thank you so much for your kind words, Michael! Our dad truly was an amazing man. He loved his job, his coworkers, and everyone he met wihile working there. He will be missed by so many......
HS

Posted Feb 24, 2021 at 09:57am
Please accept our deepest condolences and heartfelt sympathy.

Flowers were purchased for the family of William 'Bill' Marshall. Send Flowers 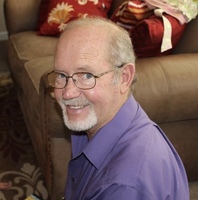