To share your memory on the wall of Virginia Walker, sign in using one of the following options:

Virginia Marie Walker, 97 passed peacefully at her home in Ault, CO on April 21, 2020. Virginia was born on the family farm near Lenox, IA to Charles Hurbert and Mary Katherine (Beck) Morris. She was the youngest of four children. Being born at home she did not receive an official certificate of birth but was given a “Cradle Roll Certificate” from the nearby Salem Church which was accepted as a verification of her date of birth when she applied for a Social Security number many years later. As a young child Virginia remembered attending old fashioned revival meetings at that church and on Sundays her family attended church at Stringtown, IA. The social life of her family, like most farming families of that time, centered around their church, school and farming community. Her childhood memories reminded us of the Little House on the Prairie series. Having lived nearly a century, she witnessed major changes in the culture and lifestyle of America. Virginia talked about the transition from horse power to the gasoline engine, getting a telephone and having indoor plumbing, seeing old wood stoves replaced with gas and electricity for heating and cooking, and leaving behind the washboard, tub and clothes line for a washing machine and dryer. She saw the invention of the TV, internet and many other modern day items that we cannot imagine living without. Virginia loved to write and composed short stories and poems over the years to capture these memories for following generations.

Her primary education, grades 1-8, was acquired in a one room country school house. She walked with her siblings to and from school daily regardless of the weather to attend classes. Being the youngest and smallest, she recalled often falling behind but said that she didn’t mind because she wasn’t alone. She carried her lunch pail in one hand and held Jesus’ hand with the other. She attended grades 9-12 at Lenox High School where she acquired the nickname “Cricket” which she retained for her lifetime among her high school and Lenox community friends. She went on to receive a teaching certificate from Maryville College in Missouri and upon graduation she began teaching in the same one room country school house she attended as a child.

Early in 1943 she was engaged to her high school sweetheart, Henry Edmond Walker. On the morning of June 1st it was raining and the farmers were unable to get into the fields so wedding plans were hastily made and at 7 o’clock that evening Henry and Virginia were married. The wedding ceremony was conducted in the pastor’s parsonage living room.

Henry and Virginia had two children, William Morris and Mary Jolene. Over the 53 years of their marriage they farmed the “Walker Family Farm” and had a clothing store in Lenox, IA. Some years later Henry purchased his own truck and became an OTR Trucker hauling automobiles from Detroit to other parts of the country. In 1956 they moved to Greeley, CO where they purchased the Starlight Motel. Virginia managed the motel and their children filled the roles of maid and maintenance workers. When their children left home they sold the motel and moved to different locations as Henry’s employment required; first to Albuquerque, NM then to St. George, UT and lastly to Cheyenne, WY before returning to Greeley. While living in Greeley they found wonderful fellowship, friendships and spiritual growth at Grace Church.

In retirement they joined thousands of other “Snow Birds” wintering in Arizona and developed many lifelong friendships during the winters spent there. During those years Henry’s health deteriorated and on March 9, 1996, he went to his eternal home with Jesus.

Following Henry’s death, Virginia moved to Ault, CO where she lived with her son. She was involved in the lives of her grandchildren and great-grandchildren enjoying numerous school, music and athletic events. She maintained a close circle of friends who would gather each month to celebrate birthdays. She remained an active participant in her church in Ault as well as Bible Study and prayer groups.

During her final weeks she enjoyed visits from her family and recalled many memories, including her childhood recollection of walking to school holding Jesus’ hand. Her strong faith in Jesus’ saving work on the cross gave her the assurance that He was walking with her still on the journey to her eternal home.

Memorial gifts may be made to Northern Colorado Youth For Christ.
Read Less

Receive notifications about information and event scheduling for Virginia

There are no events scheduled. You can still show your support by sending flowers directly to the family, or planting a memorial tree in memory of Virginia Marie Walker (Morris).
Plant a Tree

We encourage you to share your most beloved memories of Virginia here, so that the family and other loved ones can always see it. You can upload cherished photographs, or share your favorite stories, and can even comment on those shared by others.

Plant a Tree in Memory of Virginia
Plant a tree 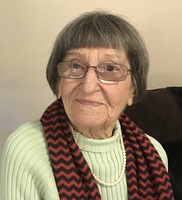