To share your memory on the wall of Vicki Bergstrom, sign in using one of the following options:

As a child, Vicki’s family moved to California wher... Read More
Vicki Bergstrom, 71, of Fort Collins, passed away on November 12, 2019 in Greeley.

As a child, Vicki’s family moved to California where she would spend her childhood growing up in the Bay area. After graduating from high school, she would marry her first husband, and they would have three children. Her career would be a life of servanthood working in various industries but preferring to be customer service focused.

In 1981, Vicki and her family moved to Colorado and she would tell you “Colorado was home”. She fell in love with the mountains: The Poudre river, the smell of the pine, the crispness of the air. After a few years her parents and her sisters would end up living in Colorado as well. There would be many moves along the way, but she always came back “home”.

In late 1989 Vicki moved to Rockford Illinois. While she never really cared for Illinois it would change her life. There, she met Gary. The love of her life. They met at a Marc’s Big Boy Restaurant where he was a cook and she was a waitress. They both were in separate relationships, but a friendship developed. When Vicki returned to Colorad. In 1991, she left telling Gary “If you are ever in Colorado look me up and I will show you around”. 5 months later, Gary showed up in Colorado, found Vicki, and they would be together until he passed away in 2002. Vicki never would remarry saying “I already had the best”.

Vicki made many friends along the way but tended to keep her circle of close friends small. Her friends would describe her as "the party planner". She was always willing to help when someone needed a laugh, a kick in the behind, information on various subjects, a friend to listen, or maybe a ride somewhere.

Vicki enjoyed hiking, reading, movies and puzzles. She was always up for an adventure whether it was a drive in the mountains or a walk around a pond. She also enjoyed and welcomed a good debate, primarily about political and social issues, always saying “It is important to try and see other’s perspectives, even if you do not agree, but to do so in a respectful and courteous manner”.

She was preceded in death by her husband, Gary Bergstrom; and parents.

A celebration of life is planned for Spring 2020 at Fish Creek in Poudre Canyon.

In lieu of flowers, the family asks you to consider donating to: Northern Colorado Medical Center foundation or UNICEF/K.I.N.D. program.
Read Less

There are no events scheduled. You can still show your support by sending flowers directly to the family, or planting a memorial tree in memory of Vicki Lynn Bergstrom.
Plant a Tree

We encourage you to share your most beloved memories of Vicki here, so that the family and other loved ones can always see it. You can upload cherished photographs, or share your favorite stories, and can even comment on those shared by others.

Plant a Tree in Memory of Vicki
Plant a tree 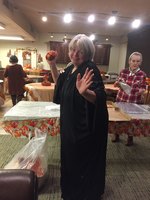