To share your memory on the wall of Vesta Pratt, sign in using one of the following options:

In July 1953, she and the children joined Hank in Japan where he had been recalled to service for the Korean Conflict. Before the family's return to the United States in 1961, Vesta who had a life-long interest in art took private lessons under Professor Kohei Aeita where she learned to do sumi painting and traditional Japanese painting on silk. She also took classes under various Japanese instructors in photography, woodcarving, flower arranging, sketching as well as oil and water painting. Woodcarving almost did her in as the shellac the Japanese use is sumac based and she had to be hospitalized for the severe poisoning. Her work was exhibited at the American Cultural Center in Yokohama. She was the recipient of many awards in the numerous shows that she had entered. She also had an interest in the physical world as well as the art world as evidenced by her climbing Mt. Fuji in 1957. It was not all play and no work in Japan as Vesta worked in the Command Section Headquarters of the Far Eastern Exchange Service in Ofuna, Japan for three years and at North Pier Terminal in Yokohama for a year. The highlight of her employment in Japan was flying to Seoul, Korea for an Area Council Meeting and making a trip to the DMZ at Panmunjom. Very exciting, particularly at that time.

Upon returning to the States, Mom after various moves from California to Kansas to Virginia to California went back to Kansas where she obtained a second major in art in 1969 at Ft. Hays specializing in graphics. That same year Mom and Hank moved to Kansas City, MO where she subsequently took printmaking at the
Kansas City Art Institute in 1971 and batik at Avila College in 1972. She was Vice-President of the Greater Kansas City Art Association in 1974-1975 as well as a member of the Tri-County Art League. When Hank retired in 1977, he and mom traveled extensively from their home at Clinton Lake, Kansas in the winter months throughout the South, Southwest and Mexico where she was able to sketch and paint the scenery of various State and National Parks. In 1994, Hank and Mom moved from Clinton to Wakeeney where she indulged in her great passion of yard and garden work while pursuing her artistic endeavors and of course caring for Penny, her boon companion little dog for many years. In June, 2012, Mom went to live with her daughter, Megan and son-in-law, Pat Hemming at their residence in Greeley, CO until her passing.

Mom was a member of the greatest generation having her youth in the Dirty Thirties, the Great Depression and WWII. She will be sorely missed by her family, relatives and friends.

She is survived by her children, son, H. Jonathan Pratt, and daughter, Megan Kathleen Hemming; and granddaughter, Brigette Hemming.

Services will be held late this spring at the Studley, Kansas Cemetery. In lieu of flowers, the family requests a contribution to breast cancer research.

We wish to thank our relatives, friends and neighbors for their support and well wishes.

To plant a memorial tree in honor of Vesta Pratt, please visit our Heartfelt Sympathies Store.

There are no events scheduled. You can still show your support by sending flowers directly to the family, or planting a memorial tree in memory of Vesta Pratt.
Plant a Tree

We encourage you to share your most beloved memories of Vesta here, so that the family and other loved ones can always see it. You can upload cherished photographs, or share your favorite stories, and can even comment on those shared by others.

Plant a Tree in Memory of Vesta
Plant a tree 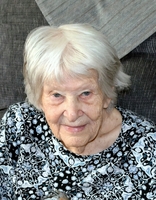