To share your memory on the wall of Thomas Anderson, sign in using one of the following options:

Thomas Mark Anderson, 60, of Gilcrest, Colorado, was born February 9, 1961 in Gregory, South Dakota, to John C. and Alice (Bailey) Anderson. Tom passed away on March 27, 2021 at his home.
Tom attended school in a one room schoolhouse in South Dakota until the age of 9. At that time the family moved to Messex, Colorado. He continued his schooling in Merino, eventually graduating in 1978.
Tom was a jack-of-all trades. He was a farm hand with his brothers, started his own business- A-1 Mobile Home Services, and worked in the oilfield on drilling rigs. At his time of passing, Tom was a truck driver for the United States Postal Service. This job was the one Tom often spoke about enjoying the most.
In 1979 Tom married Jeanne Brown, together welcoming four children. They raised their kids on a farm south of Kersey, Colorado. He enjoyed growing a very large garden and raising a variety of animals with his family.
In 2005 he moved to Gilcrest, Colorado. Tom married Cindy Goertzen in 2011. They loved going for long drives and spending time with their dogs.
He is preceded death by his parents, sister Jennifer, aunts and uncles, and wife Cindy.
Tom is survived by his four children Mandy (Gary) Wilmont, Kristi (James) Hernandez, Jillian
Anderson, T.J. (Brooke Honsa) Anderson, three grandchildren Brookelynn, Gabriella, and Nicholas Hernandez, lifelong friend Dave Crooks, An aunt, many nieces and nephews, great nieces and nephews, and two great great nephews.
Read Less

To send flowers to the family or plant a tree in memory of Thomas Mark Anderson, please visit our Heartfelt Sympathies Store.

Receive notifications about information and event scheduling for Thomas

We encourage you to share your most beloved memories of Thomas here, so that the family and other loved ones can always see it. You can upload cherished photographs, or share your favorite stories, and can even comment on those shared by others. 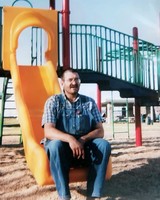