To share your memory on the wall of Rudolph Freese, sign in using one of the following options:

Print
Dr. Rudolph John Freese Jr., known as “Jack” went home to be with his Savior on Wednesday, December 9th 2020. Jack passed in his home in Greeley, Colorado. Surrounded by his loving family and friends.

Jack was born in 1933 in Eliz... Read More
Dr. Rudolph John Freese Jr., known as “Jack” went home to be with his Savior on Wednesday, December 9th 2020. Jack passed in his home in Greeley, Colorado. Surrounded by his loving family and friends.

Jack was born in 1933 in Elizabeth, New Jersey to Rud and Nancy Freese. He grew up between Indianapolis, Indiana and Greenwich, Connecticut, spending the summers of his childhood at Breezy Point on the Connecticut shore. Jack grew up with his two sisters, Betty and Pat. Jack along with the rest of his family loved music, was a wonderful pianist, and guitarist. He could virtually pick up any instrument and play it . He had fond memories of gathering around the piano as a child and singing together with his family. He was also very academically intelligent, with a love for mathematics and physics from an early age.

Jack was admitted to MIT in 1948, where he majored in physics and mathematics. In addition to his academic pursuits, he participated in the MIT wrestling team and the ROTC program. Upon graduation he entered the Air Force and was trained as a fighter pilot and served in Korea and Japan from 1957-1960. He proudly flew the F86D Sabre Jet. Jack spoke often of his time as a fighter pilot and the impact it had on him. He said he never felt so close to God, as he did when he was alone in his plane 50,000 feet in the sky. In 1957 he was selected for the honor to fly fighter escort for Bob Hope’s USO plane while it was flying in Korean airspace. He spoke often of that fond memory.

After returning from Japan, he worked in New York, Idaho, Alabama, Arizona, and California, before settling in Greeley in 1973. He moved to Greeley to pursue his PHD in Statistics at University of Northern Colorado. Statistics and teaching proved to be one of Jack’s lifelong loves. He completed his PHD and went on to teach Statistics and Computer Science in the College of Business at UNC. He was an excellent teacher and was names “Professor of the Year” several times. Even after he retired, he continued to work in statistics both as a hobby and as a consultant. A warm family memory is of Jack sitting down to most every breakfast while working out statistical equations on a napkin.

After retirement Jack became deeply involved in volunteering with Hospice as well as Energy work called Healing Touch. He was deeply empathetic and would spend his time visiting hospice patients and perform energy work to aid in diminishing anxiety and pain. Jack was passionate about being present with those in pain and who were going through the dying process.

Jack was a health enthusiast. He had a home gym that he worked out in daily. He was dead lifting twice his body weight up until a year ago. He also loved to run, but as he aged, he went from jogging to wogging (as he liked to call it). Jack was also a very spiritual person and would spend time in meditation and centering prayer almost daily.

Jack adored animals and had a long list of animals he loved dearly throughout his life. In the first half of his life, it was mostly dogs, and the last half mostly cats. His last cat, Gabriel Horatio, passed a few months before Jack’s death. Although Jack grieved deeply over the loss of his companion, Gabe, his sorrow was softened by the realization that Gabe would not be left behind.

The word that comes to mind when thinking of Jack is “gentle”. He was a very private man, but he had a huge heart of love for people. He had a desire to see people at peace with themselves, and each other. He was soft spoken, kind, gentle, and intellectually brilliant. His loving presence will be dearly missed.

Memorial service will be in the Spring. Date and Location to be named at a later date.
In lieu of flowers, and to honor Jack’s love for animals and people, please send donations to Weld Food Bank, 1108 H St, Greeley Co, 80631 https://weldfoodbank.org/ or Humane Society of Weld County, 1620 42nd St, Evans, CO 80620 https://www.weldcountyhumane.org/.
Read Less

Receive notifications about information and event scheduling for Rudolph

There are no events scheduled. You can still show your support by sending flowers directly to the family, or planting a memorial tree in memory of Rudolph John Freese Jr..
Plant a Tree

We encourage you to share your most beloved memories of Rudolph here, so that the family and other loved ones can always see it. You can upload cherished photographs, or share your favorite stories, and can even comment on those shared by others.

10 trees were planted in the memory of Rudolph Freese

What a beautiful sentiment Allen! Thank you.
AJ

Thank you Lori. When I am notified where the "grove" of 10 trees is planted, I will send you the location.
SM

Jack and I had such a fun friendship, built from the first day of a healing Touch class I was teaching in 19??. He was one of my students, sitting in class with his arms folded over his chest, quite skeptical of what I was saying…until he felt the energy. He went on to become, in my mind, one of the greatest energy workers I knew.

He was such a humble man – always downplaying his gift, but always ready, willing and able to help anyone in need. He and his friend, Gregg, came to the hospital in Loveland back in 2002, to help my mother, who had suffered a stroke, when I was too distraught to be effective. He helped me with so many different clients – another one whom I loved dearly, who was a quadriplegic. His heart was huge and he deeply loved his family! And Gabe!

I have many, many fond memories of your father and his kindness.

Steve (my husband) and I were just talking about when he visited us at our home on Bingham Hill, in LaPorte, Co. He brought us sketch books and pencils and taught us about the joy of drawing.

The world is truly a sadder place without him in it, and yet, his legacy and love live on in each of our memories.

Please give my condolences to everyone. He will truly be missed.

Posted Dec 21, 2020 at 06:49pm
There are no words to express how much I am going to miss you dad. You were such a blessing to me and my childresn and I'm so glad that we had the beautiful relationship that we shared. Til we meet again Pax Vobiscum - I love you dad!
Comment Share
Share via: 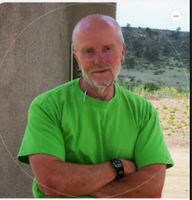 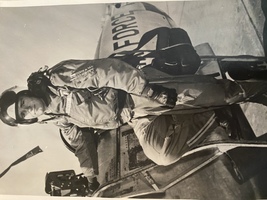 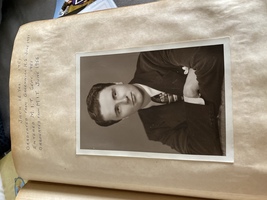