To share your memory on the wall of Robert Brackin, sign in using one of the following options:

Receive notifications about information and event scheduling for Robert

There are no events scheduled. You can still show your support by sending flowers directly to the family, or planting a memorial tree in memory of Robert Sampson Brackin Jr..
Plant a Tree

We encourage you to share your most beloved memories of Robert here, so that the family and other loved ones can always see it. You can upload cherished photographs, or share your favorite stories, and can even comment on those shared by others.

Posted Nov 17, 2020 at 09:57am
Many happy memories of Bob and many jokes, always had a smile & joke to share with office staff. Thoughts & prayers to family
Barry Gustafson & staff at Advantage Insurance
Comment Share
Share via:
DL

Posted Nov 13, 2020 at 02:45pm
So sorry to hear of Bob's passing. We first met in the early 80's when I judged a cattle show in Kersey and Bob was there (second guessing my placings!!). We had many laughs about that over the years.

More recently, but still quite a while ago, we attended a wedding reception at The Ranch and he and his wife (I apologize for not remembering your name) were seated at a different table next to my wife and I. On the tables were little buckets of Hershey kisses so I proceeded to try to launch one of them at Bob. Unfortunately, it came up short and landed in his wife's hair. I was totally embarrassed and apologized profusely. But that didn't stop Bob. Every time I saw him at the sale barn since then, he would tell one or more of his many friends how I intentionally threw the kiss into her hair. He just wouldn't "let it go" but we both knew it was all in good fun (I hope!).

Over the years Bob and I did some cattle trading and I always appreciated his honesty and his treatment of me with respect even though he had so much more experience than me. He was a straight shooter.

Please know others care and Bob will be missed. Best wishes to you and yours! 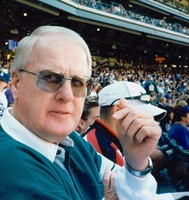