To share your memory on the wall of Patsy Foelske, sign in using one of the following options:

Provide comfort for the family of Patsy Foelske with a meaningful gesture of sympathy.

After college she moved to Denver/Aurora, CO area. She worked at the Aurora Stables prior to being hired by the Greeley Police Department (GPD) in 1971.

She began her duties as the first female “Patrolman”, on the GPD, receiving promotions to Sergeant and Lieutenant. She worked in patrol, detectives and internal affairs.

She was active in many law enforcement organizations during her career.

In 1992 she realized the dream of her life, combining her love of horses and her love of law enforcement when she was able to join the Weld County Sheriff’s Posse and receive training as a mounted law officer.
She was recognized as a Greeley Police Department mounted police officer and participated in many once-in-a-lifetime opportunities. She received certification as a mounted police techniques instructor in 2001 from the University of Louisville, KY. Last August she was awarded a Lifetime Achievement Award from the Weld County Sheriff’s Posse.

She retired from the Greeley Police Department December 2007 with the rank of Lieutenant. She continued to assist with law enforcement events as well as community events and remained a member of the Posse.

“Do not weep for me, for I’ve gone riding with our Lord. I’ll be watching over you all from above.”
~Pat Foelske
Read Less

We encourage you to share your most beloved memories of Patsy here, so that the family and other loved ones can always see it. You can upload cherished photographs, or share your favorite stories, and can even comment on those shared by others.

Posted May 16, 2019 at 05:43pm
I met Pat in May 2000 when I joined the weld county posse. She helped me from the first. Pat was always a wonderful person and I will always think of her as the family I never had.
Comment Share
Share via:

Posted May 15, 2019 at 10:10am
Thank you Pat for all the time and effort you put in helping with our FDNY visit to Greeley after 9-11. It was a pleasure meeting and spending time with you and all the Greeley PD and FD. Your efforts made it a lasting and memorable trip and we are forever thankful. Rest in Peace.
Lt. Mike Glander FDNY ret.
Comment Share
Share via:
HS

Flowers were purchased for the family of Patsy Foelske. Send Flowers 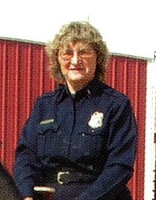