To share your memory on the wall of Patrick Sperry, sign in using one of the following options:

Pat passed away in his wife’s arms at the age of 77 at Northern Colorado Medical Center on June 19th 2020. Patrick was born in Denver, Colorado on March 27, 1943 to his parents Fred and Doris Sperry. He lived mos... Read More
Patrick Duane Sperry

Pat passed away in his wife’s arms at the age of 77 at Northern Colorado Medical Center on June 19th 2020. Patrick was born in Denver, Colorado on March 27, 1943 to his parents Fred and Doris Sperry. He lived most of his childhood in Casper, Wyoming. He graduated high school from Natrona County in 1961. He married his high school sweetheart on August 21, 1965. After Casper College, he graduated from the University of Wyoming, with a Bachelor of Pharmacy in 1966. They moved to various states while he was the manager of Osco Drug for sixteen years. Pat’s son, Michael was born in 1967. His daughter, Nicole, was born in 1974. His lifelong dream was to own his own drugstore and that dream came true in 1983 when he bought Sperry Drug in Lusk, Wyoming. His family and business flourished for twenty-five years in Lusk. He enjoyed working with Mike at the store and watching Nikki participate in athletics. In 2009, Pat sold Sperry Drug and retired in Greeley, Colorado to be closer to his family and in particular his grandchildren, Payton and Brady. He enjoyed watching his grandchildren grow up and play sports. He also enjoyed gambling, golfing, fantasy sports, listening to music, and traveling with his family. His other greatest love was his miniature schnauzers. Pat was happiest to be with his family and dogs, watching his Fantasy football players. Pat helped everyone he could during his lifetime. He helped his son-in-law, Greg and his partners start their engineering business, G2 Consulting Engineers and was partners with his son, Mike with the Mosquito Authority business. People who knew Pat, knew he was a great and generous man. To know him was to love him. Pat did not have a huge family, but he was the pillar to them all. He will be greatly missed.
Pat was survived by his wife Norene, his brother Robert, (Terry) Maricopa, Arizona, his son, Michael, (Penny), Henderson, CO, his daughter, Nicole (Greg) and two grandchildren, Payton and Brady, Greeley, CO.
In lieu of flowers, please make donations to the American Heart Association.
Read Less

Receive notifications about information and event scheduling for Patrick

There are no events scheduled. You can still show your support by sending flowers directly to the family, or planting a memorial tree in memory of Patrick Duane Sperry.
Plant a Tree

We encourage you to share your most beloved memories of Patrick here, so that the family and other loved ones can always see it. You can upload cherished photographs, or share your favorite stories, and can even comment on those shared by others.

Posted Jun 30, 2020 at 08:28pm
We moved to Greeley in Aug. 2015. When looking for our home we almost bought next door to Pat. Found a home just blocks away and got aquatinted on the walks we did., with Gracie his wonder miniature Schnauzer . We went to dinner a few times and helped him and Noreen install cabnets and a banister in the garage. We shared stories about places visited and we shared home cooked meals.. we talked about politics in a friendly way and both agreed that changes were being made in Washington to our liking. Pat was a big man in a small body......tough with true character. John and Jeanne Brunk
Comment Share
Share via:
KK

Posted Jun 25, 2020 at 03:24am
We appreciated all the things he did for my mother in Lusk. He was so good to her. He will be missed, prayers for all the family.
Dennis and Judi Fogle Torrington, Wy
Comment Share
Share via: 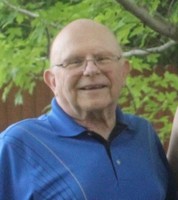