To share your memory on the wall of Milton Davis, sign in using one of the following options:

Print
Milton Davis, 62, of Johnstown, Colorado, went to sleep in death on December 25, 2020 from his home in Johnstown.

Milton was born in Livermore, California to Patrick & Marjorie (Meyer) Davis on November 11, 1958. On September 11, 1976 in Ceres, California, Milton married the love of his life, Wendy (Burdick) Davis.

Milton, known affectionately as Mit or Milt, was an extraordinary man. A man of few words, but who had great love for his family and Jehovah God. A faithful, hardworking and loyal husband, dad, papa, brother, friend and family man. A carpenter by trade but handy in all things, always having the right tool for the job and the expertise to save any job one of us had the ambition to start without him.

He looked forward to welcoming back his own parents who shared his faith in an Earthly resurrection according to Gods original purpose.

He would shudder at the thought of being the center of attention, as he was a modest and unassuming individual. Only possessive of his coffee cup and work truck. The cleanest pickup on any job site around. His favorite color was pink because “Only real men wear pink”.

He patiently taught all 3 of us kids to drive because as he would say “I ain’t scared.” Always faced challenges with a cool head and wisdom beyond his years. He always said, “Ice cream tastes best when it’s cold outside”.

We made mischief everywhere we went together, usually involving innocent bystanders and then laughing later about our antics. A temporary absence from him seems too difficult to bear. We are utterly helpless to this enemy death, but God himself will bring it to nothing (Isaiah 25:8) and in dark times like these we find comfort in knowing Jehovah will soon wake those sleeping in death. (Acts 24:15) His son Christ Jesus guaranteed it by giving his own life in our behalf. (Romans 5:19) He brought joy and will be missed deeply by all who knew him.

He was preceded in death by his parents;

A Celebration of Life will be planned in January, 2021.

Receive notifications about information and event scheduling for Milton

There are no events scheduled. You can still show your support by sending flowers directly to the family, or planting a memorial tree in memory of Milton Franklin Davis.
Plant a Tree

We encourage you to share your most beloved memories of Milton here, so that the family and other loved ones can always see it. You can upload cherished photographs, or share your favorite stories, and can even comment on those shared by others.

Posted Jan 05, 2021 at 03:00pm
62 years is that total sum of this mans life? No!!!!! He lives on in our memory all the little thing he did and said. I'm not sure why you fell asleep in death. It has been the hardest thing we as a family have ever had to over come. 41 years 4 months and 14 days that is the number of days I had with you dad. We sure made the most of it. I recall learning to drive in the snow. Laughing as we slid across the white ground sideways. The day I graduated and you filled the bed if my truck with Ice and soda for me and all my friends. How about the years we worked together. You showed me how to be a good carpenter. Then by your example how to be a good husband and dad to my sweet Becky and my boys Luke and Owen. I can't wait to see you again in paradise. For now sleep in Jehoavhs memory. I love you dad and miss you so much. "it's good to be seen"
Comment Share
Share via:
JJ

Posted Dec 30, 2020 at 11:19pm
My uncle Mit was a beautiful person with a huge heart. Knowing that he is safe in Jehovah's memory brings great comfort. Jehovah promises that he will never forget his loyal ones. He will be missed but not for long.
Comment Share
Share via:
IJ

Posted Dec 30, 2020 at 10:44am
This has happened way to soon.... such a good man.. whose love of Jehovah beautifully molded him into a devoted husband, a wonderful dad, papa, son, brother, and friend. Mitt had a quality about him that assured everyone he loved that he had their back. He could pull a laugh out of people even in the worst situation.. He was a powerful force for good and no matter the challenge he inspired faith, confidence, and courage.... I am missing you SO MUCH Mitt. But I will hold you close by, where I keep the deepest treasures of my heart until our wonderful God Jehovah brings you back to our wide open arms ALWAYS & FOREVER my little brother Ivylea
Comment Share
Share via:
RJ

Posted Dec 29, 2020 at 09:39pm
My dear brother in-law, you were only 16 years old when I first met you, 45 years ago. You were already a good carpenter at that young age! I started working along with you, your brother Tom and your dad, Pat. Married your dear sister, Ivy and here we are 45 years later. You were my partner for for quite awhile. We had some great times together, I will miss your laugh and your big hug and firm handshake for sure. My heart aches so much for you already. It's only temporary my brother. You will live again when the resurrection call goes out, you will answer that call and live again. Thank Jehovah for making that provision for your future. He didn't cause this situation but he sure will fix it soon. We will all do our best Mit, to be there to welcome you back. We love you!

What a nice man Milt was. It was so obvious that his family was so important to him and he showed that love. It radiated from his face.He truly was a great carpenter and as I grew old and needed a handrail at my house , it was Milt and Eric that came to my rescue . Eric did most of the labor but Milt told him what to do and how to do it. They are both very special men . He always had a smile on his face and a gleam in his eyes. I will miss him and have full confidence that Jehovah will help you all get through this and that it will be soon when we will be able to say "Welcome back, Milt ,welcome back. What a privilege it is too have Jehovah as our God and know withiout a doubt that we will see Milt again soon. 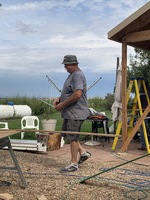