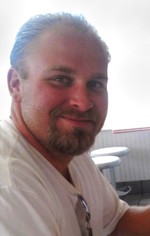 At the age of four, Mike’s mother passed away and Mike was raised as a son by his aunt and uncle, Beverly and Kit Bradshaw, Sr. Mike loved traveling with his family and growing up with his cousins, Kit Jr. and Miles, who became brothers and Bre, who became his sister.

Mike graduated from Faith Christian Academy in Arvada, Colorado where he was an All-Conference lineman on the football team. He completed two years of college at Metro in Denver. He enjoyed hiking and camping in the national forests, fishing, hunting and was an excellent skier and snowboarder.

Mike was married to Lisa Fisher and Step-Dad to Brii Cheek and loving Papa to Grandson, Zayden.
Mike’s loved ones and friends will remember him for his intellect, interests and talents in many areas; from Bible scriptures, history, war knowledge and movies (Star Wars) to construction and car repair. He was a born-again Christian, having accepted the Lord at Promise Keepers in 1994.

A celebration of Mike’s life will be scheduled at a later date. Share condolences, favorite memories and photos of Mike with his family at www.ncccremations.com .