To share your memory on the wall of Mark Reimers, sign in using one of the following options:

Print
Mark Reimers, 62, of Greeley, Colorado, passed away peacefully on April 30, 2021 at his home in Greeley.

Mark worked several ... Read More
Mark Reimers, 62, of Greeley, Colorado, passed away peacefully on April 30, 2021 at his home in Greeley.

Mark worked several jobs. Carpentry and general construction was his favorite. Numbers and math came easy for him so carpentry was a forte. He was the best scraper and loader operator around.

Marks family was the most important part of his life, which was evident in the photo album he took everywhere he lived. His grandkids were the light of his life along with his children which he was very proud of.

Mark spent a lot of his growing years out at the Reimers family farm, which he knew every square inch and may have got in trouble a few times. He moved several different times but colorado and the mountains were where he called home. He was the #1 broncos fan and went to as many games as he could. He spent a lot of time listening to the music he loved while playing air guitar. He had a love for the mountains, camping, golfing, bowling (even had a 300 game), classic cars and he loved to talk history, trivia and reminiscing about "old times". Everyone was a friend to mark

He had a huge heart and wanted to help them anyway he could. No one was ever a stranger.

He was preceded in death by his mother; and 3 brothers-in-law.

A private family celebration is planned for May, 2021.
Read Less

Receive notifications about information and event scheduling for Mark

There are no events scheduled. You can still show your support by sending flowers directly to the family, or planting a memorial tree in memory of Mark Arnold Reimers.
Plant a Tree

We encourage you to share your most beloved memories of Mark here, so that the family and other loved ones can always see it. You can upload cherished photographs, or share your favorite stories, and can even comment on those shared by others.

Plant a Tree in Memory of Mark
Plant a tree 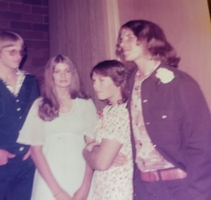