To share your memory on the wall of Marion Creed, sign in using one of the following options:

M. Robert Creed passed away peacefully in the comfort of his home on January 30, 2021. Bob was joyful and had a kind and generous spirit. He loved golfing, gardening, classic cars, and also enjoyed fishing and hunting in his younger years. Notably, Bob shot 2 hole-in-ones, and you could often see him tooling around in his 1963 Austin-Healy. Bob was well-known for his whistling, and he loved telling stories, the same ones over and over, so they are as well-known as his whistling. Bob dearly loved his family, and despite suffering from Alzheimer’s, he never once forgot the names and faces of all those family and friends close to him. Bob loved Jesus and would often read his Bible and pray for his family members to know and love Christ too. He meditated on Psalm 91 frequently, inserting the names of his children in the verses. In the last weeks of his life, you could often hear him talking to Jesus and hoping to be with him soon.

Bob was born on September 17, 1935 in Lukin Township, Illinois. He was the third of five children born to Chris Creed and Dona Keneipp Creed. He spent most of his childhood in Olney, Illinois and graduated from high school in 1953. His teachers had encouraged him to pursue a trade, but he had his mind set on becoming a dentist. He went to Southern Illinois University and the University of Illinois in Chicago for dentistry, graduating in 1960.

Bob was married to Jan Drew from 1959-1994 and they had 5 children: Terri, Chris, Greg, Cami and Amy. Bob was commissioned as a Dental Officer in the United States Air force, serving from 1960-1963. Bob moved his family to Greeley, Colorado in 1963 where he and Jan raised their children together. He had a thriving dental practice in Greeley, providing excellent care for his patients. He was also a member of the Kiwanis Club. Bob and his family enjoyed trips to visit relatives, ski vacations, and time up in the mountains. The most memorable times, however, were those spent around the table, laughing and carrying on after meals. Bob and Jan enjoyed trips to Hawaii and Japan.

Bob was remarried to Judith O’Hara Watt, and they spent nearly 27 years together until his death. They enjoyed creating their beautiful garden together and traveling to many places in the US and around the world, including trips to Ireland, Scotland, England, Hawaii, Mexico, and Israel.


A memorial service will be held for Bob on Saturday, February 6, 2021 at 12:00 PM at Cornerstone Community Church, 1321 9th Avenue, Greeley, Colorado. The service will be open to family and friends. Normal precautions for Covid-19 will be observed. A private internment ceremony will be held for close family members at Fort Logan National Cemetery with military honors at a later date, TBD.

Donations can be made to Dementia Together or Alzheimer’s Association.
Read Less

To send flowers to the family or plant a tree in memory of Marion Robert "Bob" Creed, please visit our Heartfelt Sympathies Store.

Receive notifications about information and event scheduling for Marion

We encourage you to share your most beloved memories of Marion here, so that the family and other loved ones can always see it. You can upload cherished photographs, or share your favorite stories, and can even comment on those shared by others.

Flowers were purchased and a memorial tree planted for the family of Marion Creed. Send Flowers

Posted Feb 03, 2021 at 04:42pm
Wishing you peace to bring comfort, courage to face the days ahead and loving memories to forever hold in your hearts.

Posted Feb 01, 2021 at 04:26pm
We are so sorry to hear about Bob's passing. After moving to Greeley and living next door to Greg and Tomoko, we soon became acquainted with Greg's dad. We enjoyed seeing Bob in the weight room at the Fun Plex, chatting with him and Judy as they passed by our house on their daily walk, and celebrating with them at the many family events at Greg's home. Our fondest memory was the day Sam was born. Bob had just arrived to the neighborhood and proudly announced that there was a new baby named Sam. He was so excited. May he rest in peace. 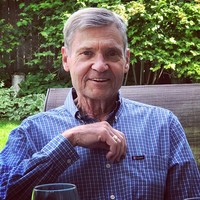