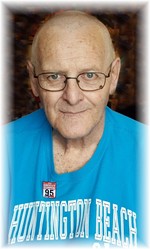 Larry Edwin Walter, 73 of Greeley, Colorado went home to be with the Lord on November 7, 2019.
Larry was born in Scottsbluff Nebraska to Edwin and Irene Walter on February 19, 1946. On March 25, 1978 in Cheyenne Wyoming, Larry married the love of his life Patricia Cromwell.
Larry was the oldest of five and was the only son his sisters are Kathy (Jim), Rhonda (Lonnie), Jan and Connie. (Jake) He loved to fishing, hunting, but his true passion was football. He played for the Nebraska Cornhuskers while he attended college their and receive his masters in Teaching in 1968. After graduation Larry was recruited to the NFL for the Kansas City Chiefs, but sustained a knee injury in preseason therefore ending his football career. He would eventually leave Nebraska and find his forever home in Greeley, Colorado, where he started working for Montfort’s of Colorado as a fabrication Supervisor for over 20 years. He met his wife Patricia in Greeley, and had an instant family with her and her four children. George A. Johnson Jr, Arthur L. Johnson, William S. Johnson and Debbie L. Johnson (Snyder).
Over the years he enjoyed boating, fishing, camping hunting and of course watching Cornhusker football. Later he would also become a Broncos fan. He loved to cook and would be the chef at all family gatherings, always preparing Thanksgiving and Christmas dinners.
Larry had 10 Grandchildren. From George - Megan Johnson, Charity Johnson, Noah Johnson of California. From Arthur -Natalie Johnson, Kylea Johnson (Shortell) Christopher Johnson, Anthony Johnson of Florida. From Debbie -- Kera Johnson (Hopkins), Tyler Snyder, and Zachary Snyder of Greeley. William never had any children .As the Children grew up and moved away and got married his true passion was his grandchildren.
He was there for every birth of Debbie’s three children. He loved to teach the grandkids how to fish, hunt, and of course play football. He never missed a concert, a game, a play or anything that his grandchildren participated in. Larry and Patricia follow his step daughter and her family to Lewiston Idaho where he would live for ten years. While there he started working at the local paper mill Potlatch.
In 2013 Larry and his wife would move back to Greeley Colorado once again to be near their daughter and her kids. He love to watch the huskers and eventually turned both his grandsons and his daughter into fans. In 2013 he became blessed with his first great grandchild Chantel Snyder.
Larry is survived by his Wife Patricia H. Walter, his step sons George A. Johnson (Tamela Johnson) of Long beach California, Arthur Johnson (Lydia Johnson) of Middleburg Florida, his step daughter Debbie Snyder of Greeley Colorado. His grandchildren, Megan Johnson, Charity Johnson, Noah Johnson of Long beach, California. Natalie Johnson of Philadelphia. Kylea Shortell (John Shortell) of Deland, Florida. Anthony Johnson (Savannah Johnson) stationed in Germany. Christopher Johnson of Middleburg, Florida. Kera Hopkins (Jerod Hopkins) of Windsor Colorado and Tyler Snyder (Danyale Snyder) of Greeley, Colorado. Great grandchildren, Chantel Snyder of Greeley, Colorado. Lily and John Shortell JR of Deland Florida.
He was preceded in death by parents Irene and Edwin Walter, his step son William S. Johnson, his grandson Zachary R. Snyder.
To leave condolences with Larry Walter’s family visit NCCCremation.com
Donations and flowers can be sent to VFW hall 2514 7th Ave, Greeley, CO 80631