To share your memory on the wall of Larry McQueen, sign in using one of the following options:

Larry had a wide love for sports, to include; the Eagels, Avalanche, Rockies, and of course the Broncos.
With his love for C.U. came a love for the Buffalo. A very powerful and majestic animal, he found them fascinating.
Another venture Larry found fascinating was Big Foot. He was an avid follower of several Big foot research groups. Almost bought one for the yard, a statue that is.
Larry worked for the City of Evans for 42 years. Many of those years as Superintendent of Waste Water. This was a job he loved and had great knowledge for. If your toilet flushed within 8 days of the 2013 flood, it was because of Larry and his dedicated crew. They worked the 24/7 hours to correct service for the public.
Larry participated in the planning and execution of the new waste water plant. Unfortunately, he was not able to see this plant go on line upon completion. But if you live in Evans, know that it is working, or you would be up to your basements in sh*t.

Larry had a dry and somewhat sneaky sense of humor. I am sure those who knew him well, will understand what I mean. Larry was a quiet soul, but a soul who loved deeply and was deeply loved. Larry will be greatly missed.
Read Less

To send flowers to the family or plant a tree in memory of Larry Delmar McQueen, please visit our Heartfelt Sympathies Store.

We encourage you to share your most beloved memories of Larry here, so that the family and other loved ones can always see it. You can upload cherished photographs, or share your favorite stories, and can even comment on those shared by others.

The Smiths, Marc, Carol, Aaron & Alli Smith, and others have sent flowers to the family of Larry Delmar McQueen.
Show you care by sending flowers

Posted Nov 21, 2019 at 12:42pm
Thank you for all the laughs Larry - RIP Wishing the family good thoughts and prayers.

The Smiths purchased flowers for the family of Larry McQueen. Send Flowers

Posted Nov 19, 2019 at 05:34pm
"Larry McQueen" will remain in our hearts forever. Peace and comfort be with you in the days ahead. Love, Marilyn Cowen and Family 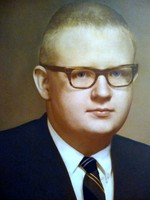