To share your memory on the wall of Jeremy Holm, sign in using one of the following options:

Jeremy “Dragonfly” Holm was a big-hearted, silly, and stubborn person. He was best known for telling a good story (with slight exaggerations), offering a helping hand, and his love for anything with a motor.

He was nicknamed Dragonfly after his 1978 Pontiac Firebird. At 17 years old, it wasn’t his first car, but it was the first car that wasn’t a POS. He actually wanted the Firebird. He named it Dragonfly, and then the name just stuck to him. It was a name he carried for another 25 years.

He was the first to offer his services, or crack a joke to lighten the mood, and he was always ready to accept a challenge. The more ridiculous the challenge, the better it was; because, why wouldn’t you race lawnmowers down the street?

If it had been a while since seeing him, it was still easy to spot Jeremy in a crowd. His signature mustache and goatee combination, Levi’s 550’s, and tennis shoes were always topped with a baseball cap, chosen just right for the occasion. “The hat makes the outfit,” he’d say.

His love for anything with a motor could be seen in the way he drove: the way he flew down the highway in the Firebird; at the dunes how, he would “shred the gnar” on the Banshee; or drove his diesel truck, he’d find the right time to “roll some coal”.
Now if it didn’t have a motor, like, let’s say, a desk chair on wheels, it probably needed one. He would break out the pen and paper to draw up the schematics and explain it all in detail on how it could work.

He was a proud small business owner, not in it for the money, but rather to make enough for his family to be comfortable. The quality of his work was important to him and would find a way to work within a budget without sacrificing his standards.

He kept these same standards on all projects, at work or for fun. Because of his extensive knowledge, working with him on a project could sometimes be a learning experience. Like learning to duck under a low door.

His family and friends were at the core of his being. He was his sister’s protector. In emergencies, his brother was who he called. If his nieces’ and nephew’s toys got broken, or bike tires went flat, or cars needed fixing, he was their go-to person. When the neighbors came knocking looking to borrow a tool, he had just the right one, plus a couple other tools they didn’t know they needed yet. He had a tool for everything, but somehow never got around to fixing the squeaky stool in the kitchen, because it was funnier that way.

His biggest accomplishments in life were his two boys, getting married, and buying his first house. The love Jeremy had for his boys was undeniable. He was so proud of the young men they had become.

He said he won the lottery the day he met his wife, and couldn’t imagine life without her. And now he won’t have to, because, in the end, he got his way.

To send flowers to the family or plant a tree in memory of Jeremy Douglas Holm, please visit our Heartfelt Sympathies Store.

Receive notifications about information and event scheduling for Jeremy

We encourage you to share your most beloved memories of Jeremy here, so that the family and other loved ones can always see it. You can upload cherished photographs, or share your favorite stories, and can even comment on those shared by others.

Posted Feb 10, 2021 at 09:35am
Wishing you peace to bring comfort, courage to face the days ahead and loving memories to forever hold in your hearts. 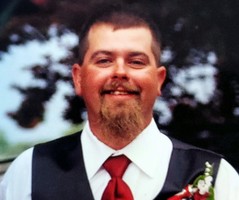