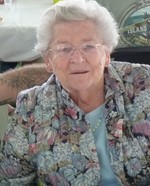 Dorothy June (Purintun) Phagan passed away October 10 at the Bonell Good Samaritan Aspen Unit. Dorothy was born June 29, 1925 in Overton, Nebraska to Everett and Ruby Pearl (Reed) Purintun.
Dorothy graduated from Overton High School in 1944. She married Rollin Lindquist in April of 1946. In September 1947 a son, Charles, was born. Six weeks later Rollin was killed in a hunting accident.
Dorothy married Gene Phagan April 2, 1949 in Denver Colorado. Two sons were born to them. Jimmie in February 1950 and Tim in March 1954. They farmed in the Lyman NE area until 1955 when they moved to Clarks Grove, MN. They farmed there until 1984 when they opened a hobby/train store and satellite shop in Albert Lea, MN.
In October of 1989 they sold the farm and moved to Greeley to be near their sons and families. Dorothy and Gene spent many winters in Mission Texas where they made many near and dear friends.
Dorothy was a hardworking farm wife, an excellent seamstress and cook. Her family often laughed when a recipe ‘didn’t turn out like the picture’ because she would substitute ingredients that were on hand. Dorothy was thrifty to no end and was teased by her sons for her unusual and thrifty supper concoctions.
Dorothy was devout in her faith. She was dearly loved by her family and everyone who met her. She will be greatly missed by all!
Dorothy is survived by two sons, Charlie (Becky) Phagan and Tim (Geri) Phagan all of Greeley, and daughter-in-law Betty Phagan of Arlington TX. Also survived by grandchildren Troy (Dawnita) Phagan, Laurie (Ryan) Alles, Mike Franks, Tony (Chris) Franks all of Greeley CO, Jason (Laura) of Evans CO, Jenny (Mike) Bishop, Sarah (Jason) Black all of Arlington TX, Mindy (David) Medick of Frisco TX. Great grandchildren surviving Dorothy include Chloe, Zane, Shelby and Jonathan all of Greeley. Jessica, Reece and Bryce of Fort Collins CO, Scraine and Kyrah of LaSalle CO, Zack (Katelyn) of Colorado Springs, Hudson, Tatum, Anderson, Lettie Rose, Mikey, Shelbie and Randi all of Texas, and Garrett serving in Iraq. One great Grandson, Lincoln of Texas survives as well.
Preceded in death by her husband, Gene Phagan, son Jim Phagan, her parents and two sisters as well as numerous dear friends and in-laws.
A private celebration of life will be held at a later date. Memorial contributions may be made to: American Diabetes Association@ www.diabetes.org/diabetes/donation; American Heart Association @ donatenow.heart.org or a charity of your choice.
Condolences may be addressed c/o Northern Colorado Crematory, 700 8th Street Greeley CO 80631