Obituary for Donald A. Douglas 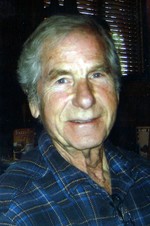 Donald Allen Douglas, 87 years old, passed away after a brief illness at Grace Pointe in Greeley, Colorado on October 3, 2020.

The son of Christabel and Theo Douglas, he was born in Kendall Florida. Two of his fondest memories of growing up in Southern Florida were roaming the woods and ocean fishing with his father.
Eager to serve his country, he enlisted in the Air Force at the age of seventeen. He served four years as a radar operator in Alaska during the Korean War. While in radar training in Southern California, he met and married his first wife, Kaye, with whom he had four children.

Returning from the service, he settled in Southern California. After a brief stint working in the tool and die industry, his work ethic caught the eye of one of the owners, Bill Hanna, who asked him to come to Hanna Barbera and learn to edit film. So began his thirty-seven year career in the movie industry. He proved to be a talented editor and worked on several movies and many popular TV shows including The Flintstones and Murder She Wrote. He was twice nominated for an Emmy in recognition of his superior editing skills. Anyone interested In seeing all his editing credits can view them on the internet at IMBD (International Movie Database).

Donald loved aviation and spent several years building a Long- Eze in his Sherman Oaks garage. Many of his most joyful moments were spent flying it wherever his heart and spirit led him. In 1979 Donald met and married his second wife, Rosemary.

They shared forty-one loving and happy years of marriage. In 1994 they retired to Greeley to be closer to family. They moved into the Mayfair Green neighborhood where he loved volunteering his time helping care for the yards and sprinkling system. He spent many happy hours landscaping the area park, creating a berm, planting trees, shrubs, and flowers. The neighborhood recently honored him by dedicating this area park to him. They named it the Donald A. Douglas Park by placing plaques on the benches he built.

Donald was a devoted student of metaphysics. As many of his friends and family know, he delighted in philosophical discussions. Never a follower, he always marched to the beat of his own drum in seeking his truths in life. He will be remembered for his kindness, humility, eagerness to help wherever needed, and his keen sense of humor (corny jokes).

He is survived by his loving wife, Rosemary; his four children from his first marriage: Sandra, Michael, Liane, and Paul (Michele); stepson William; eight grandchildren (who blessed him with several great-grandchildren); dear sister-in-law and brother-in-law, Nancy and Larry Richardson, plus many other dear friends and family.

No services will be held. In lieu of memorial gifts, just wish Donald a heartfelt "bon voyage" on his journey from this earth and do something nice for someone you love. That's what would please Donald.