To share your memory on the wall of Brenda Karges, sign in using one of the following options:

On May 1, 2019 Brenda made her last wildly inappropriate and sarcastic comment in Loveland Colorado, after a tough fight against a short illness. This was too soon for many of us, but she did not leave us without a lifetime of memories first. She is known for her larger-than-life personality, and her trademark stubbornness will not soon be forgotten. She leaves behind a very dysfunctional family that she was very proud of. She is survived by many, an older sister Sharron Haywood from whytheheck would you live there Texas. who still considers her the brat of the family and a younger brother that Brenda was still saddened by even now, of having to let out of the trash can when he was little, only because her mother insisted, she do so. Her first born Matt Karges (Terry) of Greeley, who she renamed Matilda later in life will miss her most as being the blunt of many of his jokes, he got a lot of his humor and sarcasm from mom. A daughter Kirsten Karges of Greeley, who was also blessed with her mothers mouth, mom affectionately referred to as Chris-ta-furr , she is thankful for the opportunity and gift of cooking with her, and asking Jesus to come live in her heart at a very young age. A beloved niece Bobby Haywood of Greeley, who wishes to hear her call her Barbie just one more time, and of course who will carry on the tradition of people watching and making fun of such people when needed.

Mom is most missed by her partners in crime ... her grandchildren. Alyssa Galarza (Josiah) of Greeley, misses her stubborn, sassy self that she learned so much from. Kevin Thompson (Elisabeth) of Greeley, misses his Grams very much every day. Reise Weaver misses her time spent trying to fix grandmas broken “green thumbs” and Seirra Weaver is missing grandma at her lunch dates at work. She is dearly missed by her granddaughter whom she referred to as Rowdy Reiley, they shared many afternoons together, arguing over their T.V. programs. Brenda’s great grandsons were the light of her life, Kayson Galarza, loved to work over her many medical gadgets and Aaron Thompson, who is just merging into his well ingrained family trait of stubbornness. Brenda is preceded in death by her parents.

Mom also left behind a little bit of stuff to her son and daughter and we have no idea what to do with it. So, if you’re looking for anything, from a toaster, that is slightly used, or even an old black blazer, that is really used, but very well loved. We have found things that we aren’t sure what they’re used for, and lots of stuff that was fixed up well with her grey tape and rubber banding skills. If you’re interested in anything, you should wait the appropriate amount of time, and get in touch with the family. We the family have agreed tomorrow would be fine. She has decided to keep her beloved Kitchen aid mixer, that she unfortunately never got to play with, it will be cremated alongside her, go figure she gets to keep the good stuff.

If you met her, you knew her. Mom was world-renowned for her filter being broken, she didn’t hold back her opinion and she had a knack for telling anyone like it was. She always told you the truth even if it’s not what you wanted to hear. Mostly at inappropriate times. She leaves us with so many things in our lives that seemed of little significance at the time they happened, but have then took on a greater importance, as we have gotten older. The memories we have with us now are so precious and have more value than any fine gold.

She loved animals and people alike, this is where she placed value, and she had to rescue as many as possible. (People and pets that is) Mom was a mother to all and a friend to others. She loved having a flower garden but believed her “green thumbs” were broken. She loved taking a ride to the mountains or just a long country drive. She was a connoisseur of many restaurants and loved to try new things. Mom was the best cook and made it a mission to copy many great recipes to perfection. She wrangled in many deeds done for her by simply offering a home baked pie or cookies. Her fondness for the Spaghetti Factory was only surpassed by her love of bacon, hot tea with honey and anything butter pecan especially ice cream. And of course, according to her everything tasted better with miracle whip.

She is remembered as a seamstress who sewed exquisite dresses, including several prom dresses for her daughter and the wedding dress for her daughter-in-law. She was the neighborhood school crossing guard for many, many years where her children were raised and grew up. Mom was very proud to be a grand domestic ruler. Her and her husband later owned and operated a small towing business for a few years. Later on in life, she got a double degree in Business and as a Medical Transcriptionist and yet still held a disliked for medical terminology class. She never let any of her disabilities slow her down including kicking breast cancers ass in the early 2000’s and her many stays in the intensive care unit she always came back fighting.

We know she has made it to her heavenly home to meet Jesus where she can sing joyfully, dance and run, once again. We know she was most certainly greeted by her momma and daddy and O-pah and her dearly missed grandma Raidee, and her many, dear friends, and her many beloved pets, we have no doubt, these were some of the first she greeted upon arrival.
A Celebration of Life will be at 1 p.m. on Monday, June 3rd, 2019 at Glad tidings Church, 3425 6th St, Greeley, CO 80634. Please come join us in celebrating her life with a potluck after the service. She really enjoyed Potluck on Wednesdays at Glad Tidings so we thought this would be an appropriate way to celebrate her life and to share our memories of her.

Her wishes were to be cremated, and spread in the mountains, her children will do that some day after June 3, of course when we decide not to be so lazy, and finally make a commitment, but only after we become tired of her dust collecting more dust, we promise, we will eventually find the right place for mom.
If you want to, you can look for her in the evening sunset or in the summer lilacs or amongst the fluttering butterfly’s or her beloved ladybugs. You know she will be there in one form or another. Of course, we know that will probably comfort some while antagonizing others, but if you knew her... it’s what she did and loved
Read Less

To plant a memorial tree in honor of Brenda Karges, please visit our Heartfelt Sympathies Store.

Receive notifications about information and event scheduling for Brenda

There are no events scheduled. You can still show your support by sending flowers directly to the family, or planting a memorial tree in memory of Brenda Karges.
Plant a Tree

We encourage you to share your most beloved memories of Brenda here, so that the family and other loved ones can always see it. You can upload cherished photographs, or share your favorite stories, and can even comment on those shared by others.

Plant a Tree in Memory of Brenda
Plant a tree 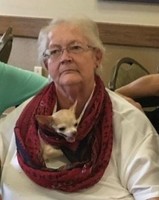