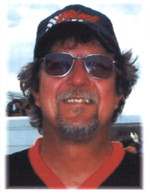 Donald Lee Konrade, 60, of Ault, Colorado passed away at home on October 25, 2019 in Ault.
Donald was born in Denver, Colorado to Bernard & Loretta (Haug) Konrade on July 4, 1959. On July 22, 2005 Don married Janet Ludeman on the start/finish line at Pikes Peak International Raceway in Fountain, CO.

Don loved everything NASCAR, Dale Earnhardt, the Denver Broncos, and Harley Davidson Motorcycles. Don’s time outside of work was spent enjoying the outdoors fishing, hunting, and working on late model vehicles. Don also made custom knives, stained glass, and metal artwork. Don loved his family very much! Don had an infectious laugh and was the life of the party. His humor and shenanigans will be greatly missed. Don graduated from Denver public schools and then went on to work as a forklift mechanic/welder at Kodak Colorado, Carestream, Crown Lift, and Welch to name a few. Don also was co-owner of Alley Arts & Collectibles in Eaton with his family until 2015

Don is preceded in death by his parents and sister Sharon Konrade.